St. Innocent of Irkutsk Russian Orthodox Church is a warm, vibrant, English-speaking, multi-ethnic and multi-racial, old-calendar parish under the Patriarchate of Moscow, comprised of many young families with children. The parish was founded in 1967 in Redford Township, on the western edge of Detroit, adjacent to Dearborn and Livonia. Presently, nearly all of the parishioners are converts to Holy Orthodoxy.

Founded on 3 March 1967 by the Rev. Fr. Igor Burdikoff (1967-1969) and a group of sixteen families, with the blessings and support of His Eminence, Metropolitan John (Wendland), St. Innocent of Irkutsk Russian Orthodox Church was established as the first all-English-speaking parish in the Metropolitan Detroit area. A church with an attached rectory building owned by a Baptist congregation was purchased and transformed into an Orthodox Temple.

Future Rectors of the parish would include:

On 4 October 1981, an arson fire destroyed much of the St. Innocent Church. Under the leadership of the V. Rev. Archpriest Basil Karpelenia, the pastor at that time, and with characteristic determination and hard work by the dedicated parishioners, the church was rebuilt. A new iconostasis and altar table were installed, which were consecrated on 12 March 1983 by His Excellency, Bishop Clement.

On 16-18 May 1984, during the Fourth Patriarchal Parishes Convocation in Detroit, Michigan, His Eminence, Archbishop Platon of Sverdlovsk and Kurgan, presented St. Innocent with the four main icons on the iconostasis (Christ, the Theotokos, St. Innocent and St. Nicholas) as gifts from the Russian Orthodox Church, which were installed and blessed. On November 12, 2016, Subdeacon Dr. Joshua Genig was ordained Deacon during a Hierarchical visit of His Grace, Bishop John. The next spring, on June 4, 2017, the Feast of Pentecost, at St. Nicholas Patriarchal Cathedral in New York, Deacon Joshua was ordained to the Sacred Priesthood.

On November 20, 2018, Fr. Joshua was appointed Rector of St. Innocent. Thus, by God's grace, a new chapter in the life of the parish began and has continued with increased services and opportunities for prayer, as well as additional catechetical opportunities and the increase in the number of those attending the Divine Services.

In June of 2019, the parish was also blessed with the addition of Hierodeacon Seraphim (Balagtas) who serves faithfully at all of the Divine Services, as well as caring for the Altar and all sacred vessels, making candles, and working with the newly-established Sisterhood of St. Elizabeth the New Martyr to regularly bake prosphora according to the Russian tradition for the Divine Liturgy. 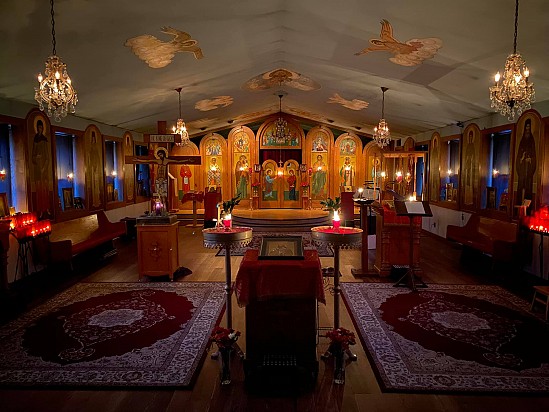 Over the years, the parish has seen the transformation of the temple interior with icons. Although the architectural plan of St. Innocent Church is simple, and although it is very plain on the outside, the interior is a magnificent small jewel, due to the life-size, full-length icons of primarily recently canonized/glorified saints that cover every wall, and contribute enormously to creating a very spiritual environment for prayer and worship. The magnificent series of icons includes eighty-two saints (plus the Pantocrator and thirteen other icons). The iconographic program is unique: it includes all thirteen American saints, plus women and men saints of many different countries—reflecting the multi-ethnic character of the parish and of Orthodoxy in America. The iconographic work has been done in ten stages between 1991 and 2008, by Very Rev. Archpriest Theodore Jurewicz of Erie, Pennsylvania — a Master Iconographer in the Russian Orthodox Church — with the latest icons added during 2007 and 2008, in commemoration of the parish’s 40th Anniversary celebration in November 2007. We also have 17 smaller panel icons painted by Fr. Theodore, most with the saints' relics in them, that are on the window ledges, easily accessible for veneration.

More than anything, St. Innocent Russian Orthodox Church is known by the piety and love of her parishioners, as we continually seek to put Christ First! in everything.